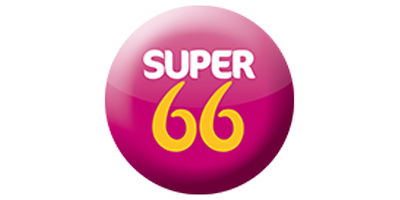 Super 66 is a popular lottery game played in most Australian states, but with New South Wales and the Australian Capital Territory not participating in the main draw.

Super 66 is unique because it can be played as a standalone game or as an add-on to the Saturday Lotto draw, with players in New South Wales and the Australian Capital Territory being able to play as an add-on game only.

Entry into Super 66 costs AUD 1.00 in Western Australia, and AUD 1.10 in other participating states.

To enter, mark Super 66 on a Saturday Lotto ticket or ask for a Super 66 entry at a lottery kiosk, or play online.

Tickets have a randomly generated set of six digits, which need to be matched to win the jackpot.

Unlike many secondary lottery games, the Super 66 jackpot can roll over up to 25 times! If the jackpot still fails to be won, it rolls down across secondary prize tiers.

The odds of winning the Super 66 jackpot are 1 in 1,000,000. These are very long odds for such a small jackpot and in comparison to more favorable lotteries around the world.

Players can win Super 66 prizes at five different tiers. For all secondary prize tiers, the first or last 5, 4, 3 or 2 numbers must be matched in the order that they are drawn.

The overall odds of winning a prize are 1 in 50.

Super 66 prizes are paid out as lump sums only.

Australia levies no taxes on lottery winnings at state or federal level.

Tickets can be bought from authorized lottery kiosks across the country or via the official website.

Players outside of Australia and New Zealand cannot participate in Super 66 at the moment.