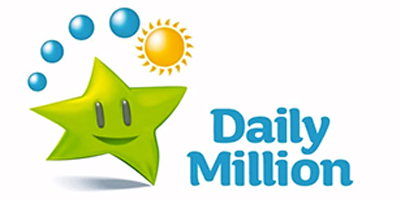 Daily Million is a popular lottery game played in Ireland.

Daily Million draws are held twice a day (including public holidays) at 14:00 and 21:00 local time. Results are published one hour after the respective draws.

To enter Daily Million, choose six numbers between 1 and 39, or go for a Quick Pick to play with six randomly generated numbers.

Daily Million also has an Advance Play feature, enabling players to enter draws for the next seven days if they wish.

Daily Million has a fixed jackpot of €1 million.

This jackpot does not roll over, with the fixed €1 million jackpot being shared equally if there is more than one winner.

The odds of winning the Daily Million jackpot are 1 in 3,262,623. These are excellent odds, but the jackpot is lower than often available from other lotteries.

The overall odds of winning a prize are 1 in 14, or 1 in 7 if Daily Million Plus is added to the ticket.

All Daily Million prizes are paid out as lump sums, with winners having up to 90 days from the date of the draw to claim prizes.

Ireland does not tax lottery winnings, but players who enter Daily Million from abroad should check local tax laws to find out if winnings need to be declared.

Who Can Play Daily Million?

Players must be at least 18 years of age to participate in Daily Million.

Tickets are on sale at authorized retailers across Ireland, while Irish residents can also enter via the official Irish National Lottery website.

Players from abroad can participate in Daily Million via authorised bookmakers and at Lottery Agent websites.

Daily Million was launched in September 2012 to replace the previous weekly Monday Million and daily All Or Nothing lotteries.

Daily Million is operated by Premier Lotteries Ireland, who bought a 20-year licence from the Irish Government in 2014 to run these lottery games across the country.