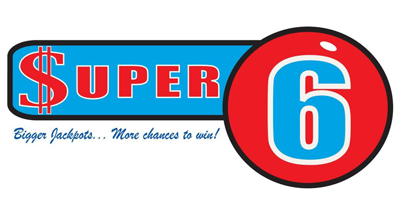 Super 6 is a transnational lottery played in countries that make up the Windward Islands. In addition to Grenada, players in St. Vincent and theGrenadines, Dominica and St. Lucia can participate in Super 6.

Draws are held twice a week on Tuesdays and Fridays at 21:00 local time, which are broadcast live on national televisionas well as on the social media channels of lottery operators in certainparticipating countries.

To play, participants must choose six numbers between 1 and 28 or go for a Quick Pick for numbers chosen at random.

Each ticket is randomly printed with a free ticket letter, with one letter being drawn after each Super 6 draw for a chance to win a freeticket by matching it.

Unfortunately, Super 6 doesn't have any secondary games or features to enhance the chances of winning a prize.

With its starting jackpot of XCD 200,000,Super 6 is an uncapped rollover game; however, despite its relatively short odds, rolloversand far larger jackpots are still relatively common.

The odds of winning Super 6 are 1 in 376,740, which are relatively favorable, albeit for a comparatively modest jackpot.

Players can win cash prizes at two further tiers, plus a free ticket for the next draw by matching the free ticket letter.

The Grenadian government levies 15% tax on all lottery prizes.

Prizes of up to XCD 250.00 can be claimed from authorized lottery retailers, with bigger wins requiring direct contact with the National Lottery Authorityitself.

Players have up to 90 days to claim prizes, with all claims having to be accompanied by a signed ticket and a form of national ID.

By law, Super 6 jackpot winners in Grenada will be named publicly.

Who Can Play Super 6?

Tickets are available exclusively from authorized lottery retailers in Grenada and in participating countries, with overseas players currently unableto participate.

Although the National Lottery Authority has its own website, this is for information purposes only.

Founded in 1982, the Grenadian National Lottery Authority - exclusively owned and operated by the Grenadian government - originally only offeredscratchcards and bingo games.

Launched on December 12, 2005, Super 6 replaced a transnational game called WinLotto, with the minimum jackpot increasing and the number of possibleselections falling at this time to vastly enhance the odds of winning.